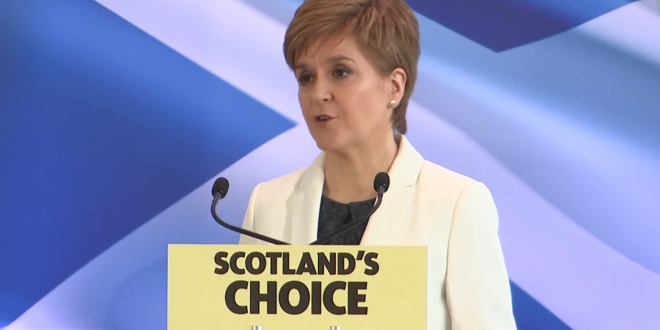 SCOTLAND: Sturgeon Vows To Renew Independence Campaign As “The UK We Voted For No Longer Exists”

Scotland’s First Minister Nicola Sturgeon on Friday said she was ready to step up the campaign for Scottish independence, as Brexit has set the country on the “wrong road.” In a speech in Edinburgh, the leader of the pro-independence Scottish National Party (SNP) said Britain’s departure from the European Union was a “pivotal moment” for the U.K. and Scotland.

“As of 11 p.m. tonight the U.K. that Scotland voted to remain part of, a U.K. inside the EU, the status quo that a majority voted for, will no longer exist,” she said. “There will be a material change in the circumstances that prevailed in 2014,” she said, referring to the last referendum on Scottish independence.

Nicola Sturgeon has warned she may be prepared to press ahead with plans for a “consultative” referendum on independence without the UK Government if Boris Johnson continues to rule out a repeat of the 2014 vote on leaving the UK.

The First Minister warned that the legal position on whether the Scottish Parliament could stage such a vote is “unclear” but that she may be ready to test this in court and rejected claims it would be a “wildcat” vote.

Bold and determined words from @NicolaSturgeon, ‘we will make the case for Scottish Independence with passion, patience and respect’ 🏴󠁧󠁢󠁳󠁣󠁴󠁿💛 pic.twitter.com/M5Nka7CUMg

Excellent speech from @NicolaSturgeon giving leadership to the people of Scotland as @BorisJohnson takes Scotland out of The EU against our will. @theSNP will step up its campaign for indy and respectfully engage with undecided voters. Scotland will determine its own future.