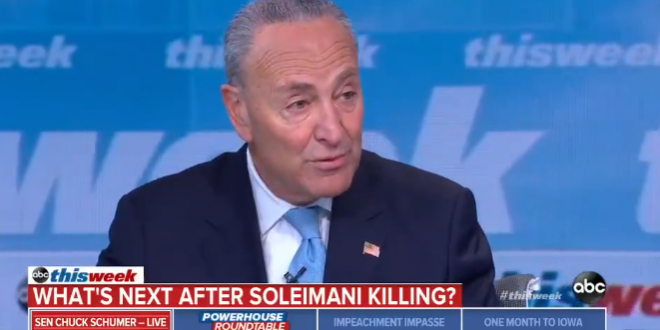 Schumer Warns Trump May “Bumble Us Into Major War”

Senate Minority Leader Charles Schumer said on ABC’s “This Week” that he was concerned Trump’s decision will “get us into another ‘endless war’ in the Middle East,” adding the U.S. is “closer to that” because of his actions.

“I am really worried, and that is why Congress must assert itself,” the Senate minority leader said, saying the president does not have the authority to start a war without congressional approval.

“I think Congress and I will do everything I can to assert our authority,” he said. “We do not need this president either bumbling or impulsively getting us into a major war.”

Senate Minority Leader Chuck Schumer tells @GStephanopoulos Pres. Trump needs congressional approval to go to war: “Congress must assert itself … We do not need this president either bumbling or impulsively getting us into a major war.” https://t.co/z82TaCy7xx pic.twitter.com/jqAsq7rbLP