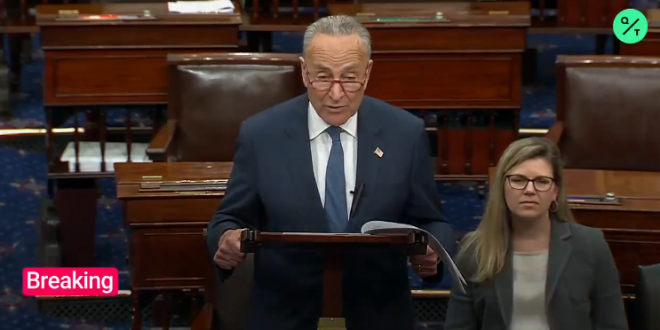 The top Democrat in the U.S. Senate said on Friday that President Donald Trump does not have the authority to go to war with Iran without congressional authorization, and said he should have consulted with top congressional leaders before the U.S. killed a top Iranian commander.

“It is my view that the president does not have the authority for a war with Iran,” Senator Chuck Schumer said on the Senate floor. “If he plans a large increase in troops and potential hostility over a longer time, the administration will require congressional approval and the approval of the American people.”

“Last night, the United States contacted a military operation designed to kill major general Qasem Soleimani, a notorious terrorist. No one should shed a tear over his death,” the New York senator said in a floor speech Friday, going on to note that Trump did not brief the Gang of Eight on the significant military action.

“When the security of the Nation is at stake, decisions must not be made in a vacuum,” Schumer said. “The framers of the Constitution gave war powers to the legislature and made the executive the commander-in-chief for the precise reason of forcing the two branches of government to consult with one another when it came to matters of war and of peace.”

Chuck Schumer notes that as a member of the Senate “gang of eight” who usually receives briefings on actions like the Iran strike, he was kept in the dark by Trump. Schumer says the provision to brief Congress is there to prevent rash and disastrous actions. pic.twitter.com/KS9bDfLgFj

Schumer: “The president does not have the authority for a war with Iran. If he plans a large increase in troops and potential hostility over a longer time, the administration will require congressional approval—and the approval of the American people.” https://t.co/CsvzNBsIlV pic.twitter.com/O4NrCn4Vmo