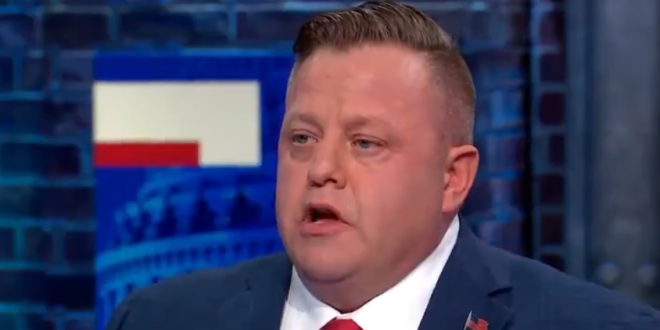 Robert Hyde, a Republican candidate for Congress and the latest person at the center of the Trump-Ukraine scandal after his messages to indicted Rudy Giuliani’s associate Lev Parnas were revealed, joined Chris Cuomo on CNN for an incredibly awkward and bizarre interview on Wednesday.

“I apologize to Eric Bolling, my man, I was supposed to do him first. Hopefully he lets me back on some day. I brought notes from the Crown Plaza, not the Ritz like Lev. You guys put me in the Crown, so I just made these notes pretty much in the bathroom.”

“I wanna thank you and CNN for this opportunity,” Hyde remarked in an awards ceremony style. “I wanna thank President Trump and the U.S. Military for providing us the blanket of freedom to do this show. I wanna congratulate Derek Jeter, that was huge…”

That’s just a tiny taste. Watch the clip for several truckloads of crazy. Edited out, for some reason, was his closing shout out to Michael Jackson “from the grave.”

A series of text messages with Rudy Giuliani associate Lev Parnas are at the center of a debate over impeachment evidence.

I will answer all questions. pic.twitter.com/4gfZlQxxKY

Can’t believe you cut off the last 15 seconds, where he took a note out of his jacket and started rattling off Trump’s Classic Hits. “It’s a witch hunt”, “the whole thing is a sham”, reading and laughing these from his notes as he’s leaving