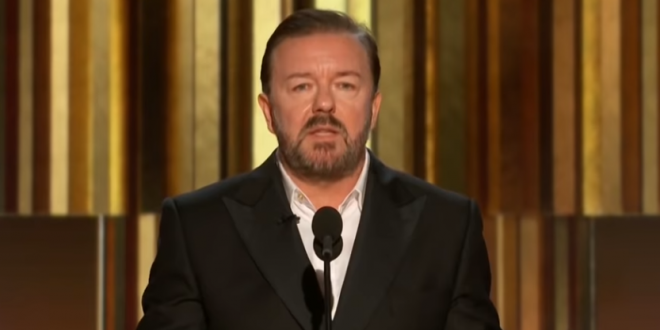 Ricky Gervais To Golden Globes Winners: You Know Nothing Of The World, Accept Your Award And Fuck Off

Once again, Golden Globes host Ricky Gervais did not shy away from hot-button topics in his monologue, even as he told the stars attending on Sunday not to elongate their acceptance speeches by referring to contentious current events.

At the top of the annual ceremony at the Beverly Hilton, Gervais ended his monologue by telling the nominees: “So if you do win an award tonight, don’t use it as a political platform to make a political speech. You’re in no position to lecture the public about anything, you know nothing about the real world. Most of you spent less time in school than Greta Thunberg. So, if you win, come up, accept your little award, thank your agent and your God and fuck off. OK?”

“This is the last time I’m hosting these awards,” Ricky Gervais said moments after taking the stage at the 77th Golden Globe Awards for his fifth hosting gig. Based on the audience reaction to his bridge-burning, F-bomb-laden monologue, this might be the last time he’s allowed in Hollywood… let alone at the Hollywood Foreign Press Association’s annual shindig.

The mood in the room was essentially summed up by everyone’s favorite L.A. neighbor Tom Hanks — this year’s recipient of the HFPA’s Cecil B. DeMille Award — whose face displayed an expression of shock and disgust every time the cameras found him in the crowd.