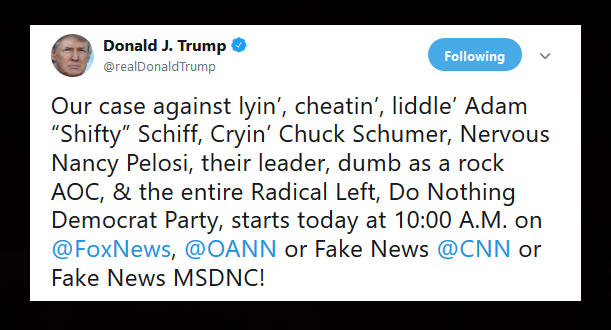 President Trump on Saturday morning encouraged his followers on Twitter to watch his lawyers present his defense in the impeachment trial beginning at 10 a.m.

Trump encouraged people to watch the proceedings on Fox News and One America News, while jabbing at CNN as “fake news” and apparently mocking MSNBC as “MSDNC” – a likely reference to the Democratic Party.

hey remember our media kept promising that our president would mature in office? they pushed those road apples at us for what, over two years? cool story, scribes of the fourth estate

.@SenateGOP_ is this moronic, child like, mentally unstable, incapable of anything but silly tweets really the guy you are willing to risk our Democracy and Constitution over? Is this really what has you so afraid? Stiffen your spines and defend America or YOU will be fired.