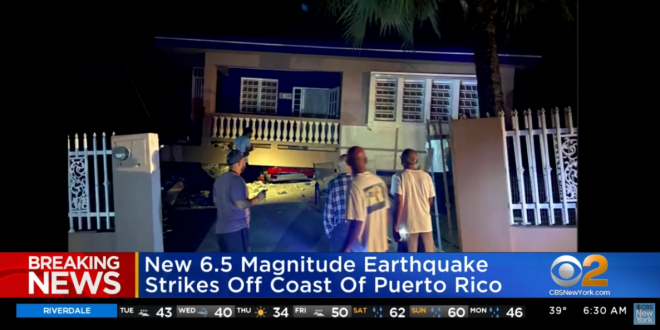 A 6.4-magnitude earthquake rocked Puerto Rico early Tuesday morning, just one day after a 5.8 magnitude quake shook the island, according to the US Geological Survey.

The 6.4 quake struck at 3:24 a.m. local time about 6 miles south of Indios, Puerto Rico, the USGS said. The mayor of Guayanilla, just north of Indios, reported damage to homes and a church. There were no immediate reports of injuries, Mayor Nelson Torres said in a phone interview with CNN affiliate WAPA.

Puerto Rico Governor Wanda Vazquez Garced urged citizens to remain calm as the government responds to the most recent quake in a statement posted on Twitter.

Puerto Rico’s power authority tweeted that one of the country’s main power plants, which sits near the epicenter, had been damaged, but officials expected to restore power to the island later Tuesday.

The U.S. Geological Survey said the quake hit at 4:24 a.m. just south of the island at a shallow depth of 10 kilometers. It initially gave the magnitude as 6.6 but later adjusted it. At 7:18 a.m., the magnitude-6.0 aftershock hit the same area. People reported strong shaking and staff at a local radio station said live on air that they were leaving their building.

Eight people were injured in the southern city of Ponce, near the epicenter of the quake, Mayor Mayita Meléndez told WAPA television. The mayor of Guayanilla, Nelson Torres, told NotiUno radio station that the church in the public plaza of his town collapsed.