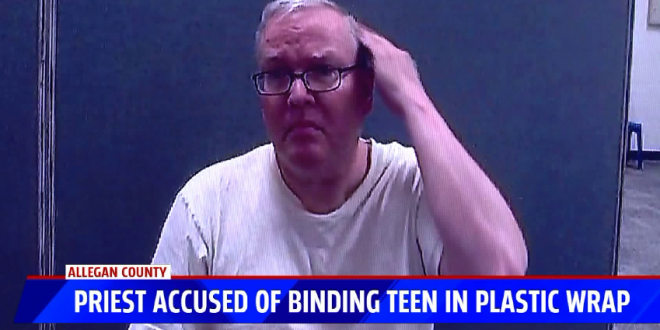 Priest Jailed For Binding Teen Boy In Plastic Wrap And Locking Him In Closet, Must Register As Sex Offender

A priest who admitted to holding a teen captive in a church janitor’s closet is headed to jail. In an Allegan courtroom Monday morning, Brian Stanley was sentenced to 60 days in jail with credit for two days served. He will also serve five years probation and must register as a sex offender for 15 years.

Stanley was charged in August for the 2013 incident that happened at St. Margaret’s Church in Otsego. Authorities say he bound the teen boy in plastic wrap and masking tape, also covering his eyes and mouth with tape. He then left the boy alone in the closet for over an hour before freeing him.

The state Attorney General’s Office, which prosecuted the case as part of a massive investigation into abuse by Catholic priests across Michigan, said the crime was sexually motivated.

The Attorney General says that the charge against Stanley comes from information in files seized from the diocese in October 2018. The family of the boy had apparently asked Stanley to help counsel their son.

The AG says that the files show that Stanley had used binding materials like this for years in this type of conduct. This type of activity is often sexually motivated.

The Kalamazoo Diocese issued a statement Thursday afternoon stating they were aware of allegations against Stanley in 2013, and further allegation in 2017, and forward those allegations to local police both times. Both times, police did not file criminal charges.