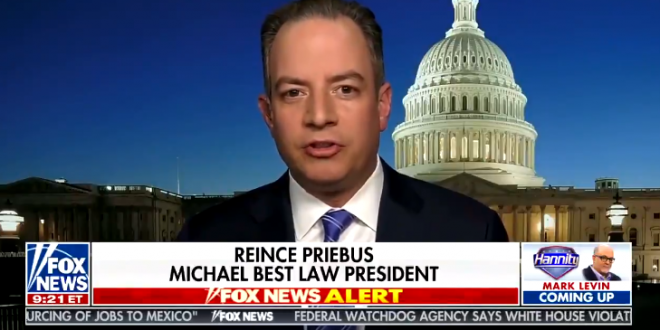 Priebus: Rachel Maddow Conspired With Pelosi, Who Held Back The Articles Until The Lev Parnas Interview

During an appearance on Fox News, former White House Chief of Staff Reince Priebus accused MSNBC host Rachel Maddow of being involved in a conspiracy with House Speaker Nancy Pelosi and Representative Adam Schiff to hold back the impeachment articles for President Donald Trump. The comment that Priebus highlighted was that Maddow said she’d been working on her interview with Rudy Giuliani associate Lev Parnas for months, after fellow MSNBC host Lawrence O’Donnell complimented her.

“When [Maddow] finished her show and then Lawrence O’Donnell took over, he was congratulating her about the interview, and he said, ‘You must have been working on this for a long time,'” Priebus said. “She said, ‘I’ve been working on this interview for months.’ If you go back, that’s what she said. In other words, Schiff knew, Pelosi knew, slow-walking the articles of impeachment, they all knew. They’re all in on it.”

Reince Priebus accuses Rachel Maddow of being involved in a conspiracy to hold back the impeachment articles so she could interview Lev Parnas? pic.twitter.com/sPdzGGPrdd