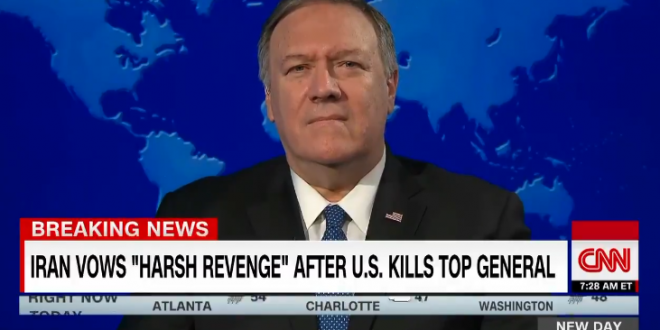 Pompeo: Iraq Airstrike Was Due To “Imminent Threats”

US Secretary of State Mike Pompeo said that the airstrike ordered to kill top Iranian commander Qasem Soleimani “saved American lives,” after Pompeo said on Twitter Friday morning that the decision to eliminate Soleimani was in response to “imminent threats to American lives.”

“I can’t talk too much about the nature of the threats. But the American people should know that the President’s decision to remove Soleimani from the battlefield saved American lives,” Pompeo said on CNN’s “New Day” Friday.

Pompeo said Soleimani was “actively plotting” in the region to “take big action, as he described it, that would have put hundreds of lives at risk.” Pompeo said the decision making process was driven by a US intelligence based assessment.

I spoke today with Chinese Politburo Member Yang Jiechi to discuss @realDonaldTrump‘s decision to eliminate Soleimani in response to imminent threats to American lives. I reiterated our commitment to de-escalation.

Discussed with @DominicRaab the recent decision to take defensive action to eliminate Qassem Soleimani. Thankful that our allies recognize the continuing aggressive threats posed by the Iranian Quds Force. The U.S. remains committed to de-escalation.

Live Now: US Secretary of State Mike Pompeo on CNN discussing the latest on the killing of Iran’s top military leader, Qasem Soleimani.