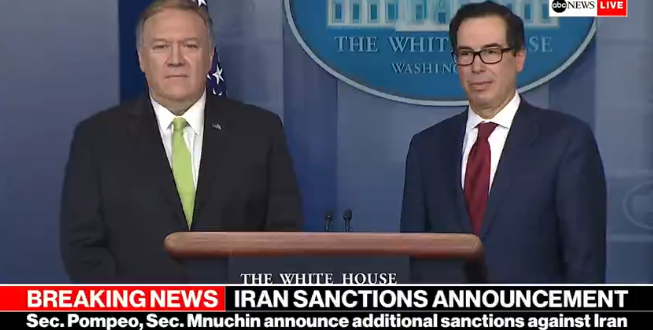 Mnuchin said the administration was committed “to stop the Iranian regime’s global terrorist activities.” Pompeo said the sanctions target eight senior Iranian officials and were designed, as he put it, “to strike at the heart of Iran’s internal security apparatus.”

He said the sanctions would hit “other leaders close to the ayatollah” and would “deny the regime the resources to carry out its destructive foreign policy, saying they would cost Iran “billions in revenue.”

“The goal of our campaign is to deny the regime the resources to conduct its destructive foreign policy.”

Secretary of State Mike Pompeo says the US will continue to impose sanctions on Iran until it changes its behaviour.

Previous Ali Forney Center’s Carl Siciliano Steps Down After 18 Years With Special Message Of Thanks To JMG Family
Next Report: Trump Ordered Strike Over Impeachment Fears