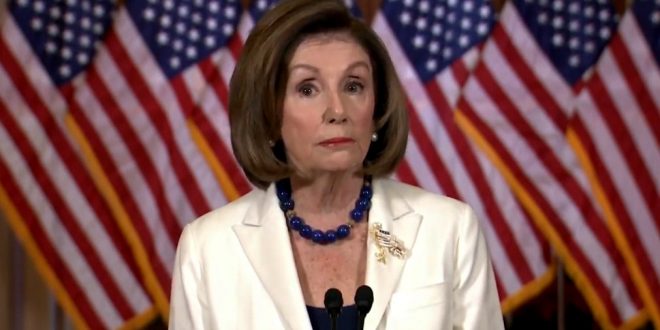 Pelosi To Attempt To Limit Trump With War Powers Vote

Speaker Nancy Pelosi (D-Calif.) announced in a letter Sunday that the House will this week “introduce and vote on a War Powers Resolution to limit” President Trump’s “military actions regarding Iran.”

Pelosi announced the action as Trump ramped up his rhetoric against Iran and also threatened Iraq with sanctions after Iraqi lawmakers passed a resolution asking the government to expel U.S. troops for the killing last Friday of Iranian Gen. Qasem Soleimani and the leader of an Iraqi militia in Baghdad.

“Last week, the Trump Administration conducted a provocative and disproportionate military airstrike targeting high-level Iranian military officials. This action endangered our service members, diplomats and others by risking a serious escalation of tensions with Iran.”

Previous Judge Judy Stars In New Bloomberg Ad [VIDEO]
Next Ricky Gervais To Golden Globes Winners: You Know Nothing Of The World, Accept Your Award And Fuck Off