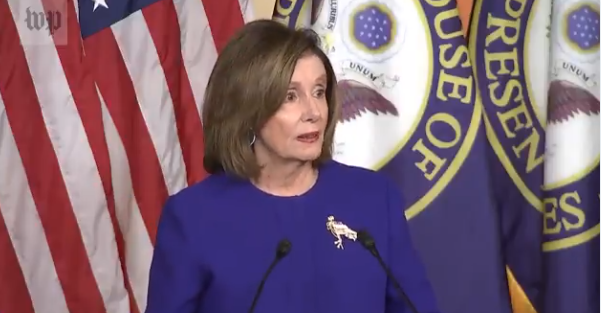 Speaking to reporters at her weekly press conference, Nancy Pelosi repeated her desire to understand the parameters of a Senate trial before transmitting the articles of impeachment.

“As I’ve said right from the start: we need to see the arena in which we are sending our managers,” Pelosi said. “Is that too much to ask?” The speaker added that she was concerned senators would not live up to their oath to hold an impartial trial to determine whether Trump should be removed from office.

“Nonetheless, at some point, we would hope that we would see from them what the terms of engagement will be,” Pelosi said. “We are ready, we are proud of our defense of the Constitution of the United States.”

NEW: Speaker Nancy Pelosi on growing pressure to deliver articles of impeachment to the Senate: “We are ready…We are concerned that the senators will not be able to live up to the oath that they must take to have an impartial trial.” https://t.co/QlQ4j6QOtq pic.twitter.com/W8KIsq6cbY

Find yourself a woman who holds you as tight as Nancy Pelosi holds her impeachment articles.

Pelosi reiterates what she said in December about withholding articles of impeachment from Senate:

“We need to see the arena in which we are sending our [impeachment] managers. Is that too much to ask?” pic.twitter.com/ZaIKzYzs6j

“No, I’m not holding them indefinitely,” Pelosi says regarding the articles of impeachment. “I’ll send them over when I’m ready. And that will probably be soon.” On McConnell’s statement he’ll move on to USMCA if she doesn’t, Pelosi says, “OK.”

Pelosi says she will turn over the articles of impeachment to the Senate when she’s “ready.”

“And that will probably be soon,” she says.

She’s making the case that her delay has accomplished several things, including Bolton agreeing to testify and new records being released.