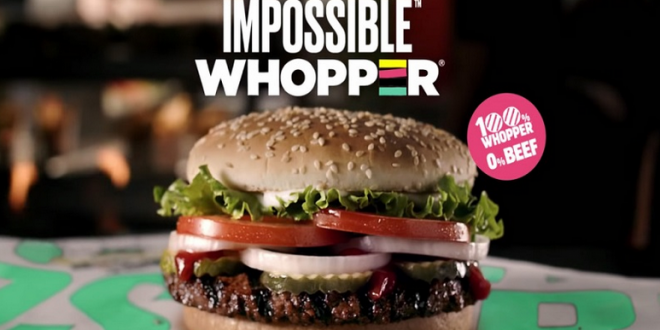 Burger King is airing a commercial that uses profanity to advertise its Impossible Whopper – a burger made from plants instead of beef. The language in the commercial is offensive, and it’s sad that this once family restaurant has made yet another deliberate decision to produce a controversial advertisement instead of a wholesome one.

In the Burger King commercial that is currently airing on TV, customers’ responses are being videoed as they taste-test the Impossible Whopper. One man is completely shocked that the burger is not beef, so he uses the d-word to describe how he feels about himself for being deceived by the taste of the burger.

One Million Moms finds this highly inappropriate. When responding to the taste test, he didn’t have to curse. Or if, in fact, it was a real and unscripted interview in which the man was not an actor, then Burger King could have simply chosen to edit the profanity out of the commercial.

Burger King’s Impossible Whopper ad is irresponsible and tasteless. It is extremely destructive and damaging to impressionable children viewing the commercial. We all know children repeat what they hear.

This ad is airing during prime time, when families are likely watching. Burger King should be more responsible in its marketing decisions. Let the fast-food restaurant know that as a parent and a customer you are disgusted by its recent marketing choices.

Burger King needs to know parents do not approve! Take Action: If you agree that this marketing effort is inappropriate, please sign our petition urging Burger King to cancel this Impossible Whopper commercial or, at the very least, edit out the cuss word immediately.