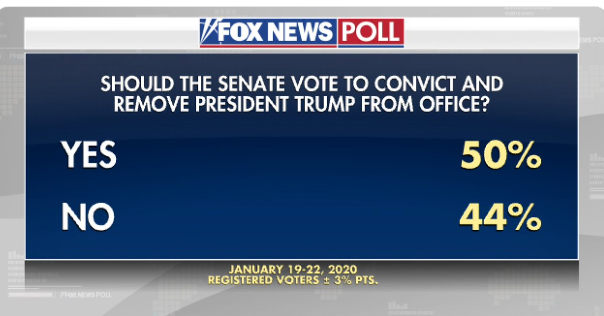 Voters give the economy its best ratings in nearly two decades in the latest Fox News Poll — and credit President Trump. And yet as his impeachment trial begins, Trump’s job approval holds steady, while half say the Senate should remove him from office.

Trump’s best job rating is on his handling of the economy: a record 56 percent approve, while 38 percent disapprove. The previous high was 53 percent approval in July 2018.

Brand new Fox poll: “On impeachment, by a 50-44 percent margin, voters think the Senate should vote to convict Trump and remove him from office.” https://t.co/VIAuzlbrsH pic.twitter.com/CUZtSyAwzo

Previous Schiff: Trump’s Tweets Are Intended To Threaten Me
Next Jon Voight: Pray That Jesus, Moses, And All The Saints Protect Trump From Filthy, Lying, Disgusting Democrats