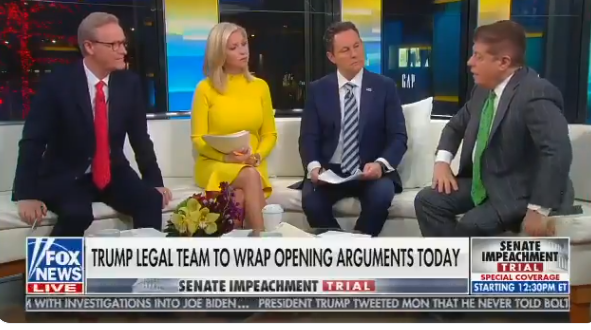 Napolitano: Trump Should Just Use “So What” Defense

Fox News Senior Judicial Analyst Andrew Napolitano argued that in light of newly reported revelations in an upcoming book by John Bolton, President Donald Trump’s best defense is to simply own up to all that the House Managers are alleging and simply argue that it’s not impeachable.

Napolitano called material that appears to be in former National Security Advisor Bolton’s book a “bombshell” before co-host Steve Doocy saying “it’s not wrong for the president to leverage, you note, some you know, some sort of foreign aid. President conditions things every day.”

Steve Doocy claims John Bolton’s testimony is “protected by privilege,” but Andrew Napolitano says that TV appearances or press conferences “would violate the privilege, but it would be perfectly lawful.” He predicts the Chief Justice would order his testimony if it came to that pic.twitter.com/RZ3AAswldG