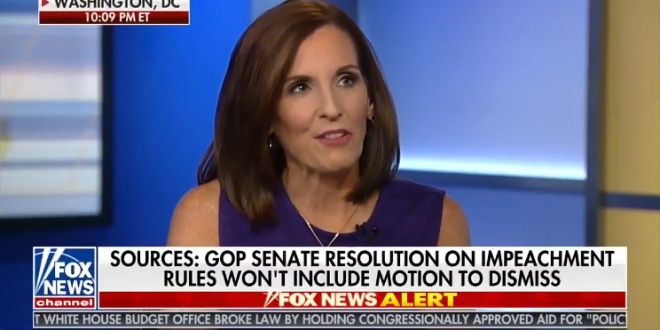 Former Air Force combat pilot and appointed Senator Martha McSally chose the GOP-friendly confines of Fox News to dismissively mock the outrage over her insult of CNN reporter Manu Raju—but then repeatedly ducked and dodged when Laura Ingraham pushed her to answer his “easy question” about whether or not there should be witnesses in the Senate trial of President Donald Trump.

“Senator, do you regret what you said?” Ingraham asked in a mock-serious tone. ” No, Laura, I do not. I said it again as I went in: ‘You are a liberal hack, buddy.’” a beaming McSally replied. “You know, these CNN reporters, many of them around the capital, they are so biased. They are so in cahoots with the Democrats and they run around trying to chase Republicans and asked trapping questions. I’m a fighter pilot. I called it like it is.”

INGRAHAM: Do you want witnesses, yes or no? Why aren’t you telling us?

MCSALLY: We’re going to get to that. I mean, I’m not going to tell everybody what all my votes are going to be.