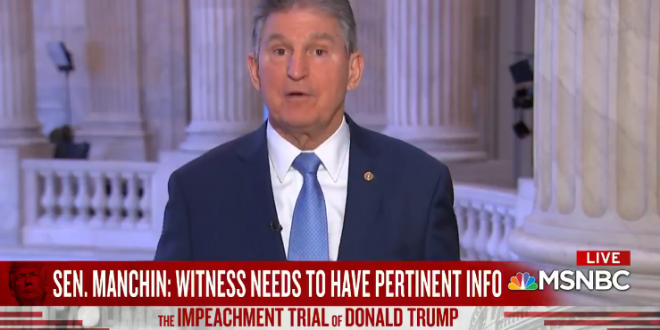 Sen. Joe Manchin (D-W. Va.) told MSNBC’s “Morning Joe” that he believes Hunter Biden is a relevant witness in President Trump’s Senate impeachment trial, adding that it could be an opportunity for Biden to clear himself.

The state of play: Senate Democrats and Republicans are jockeying over whether to call witnesses — and, if so, who would take the stand. Republicans want Biden to testify because of unproven allegations of corruption over his work with Ukrainian gas company Burisma.

Some senators have floated a witness swap — shot down by Democratic leadership — that would see Biden take the stand in exchange for testimony from former national security adviser John Bolton.

.@WillieGeist asks @Sen_JoeManchin if Hunter Biden is a ‘relevant witness.’ Sen. Manchin responds: “I think so; I really do.” pic.twitter.com/ZESiUMWTWc