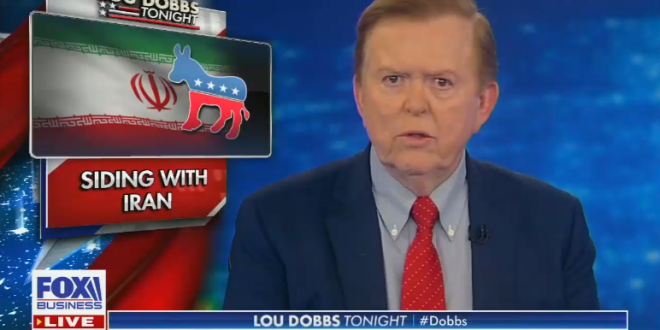 Lou Dobbs: The “Dimms” Are Aligned With Iran’s Evil

“As President Trump carries out his responsibilities to protect and defend America, statements by many of the radical Dimms suggest they are more aligned with Iranian interests than those of the United States. Rather than stand with President Trump and his defense of the nation, House Speaker Pelosi means to curtail his ability to stop Iranian attacks on America.

“Pelosi is planning a vote this week on a resolution that would limit the president’s ability to target our enemies in Iran, and Speaker Pelosi also had the temerity to absurdly call the killing of Soleimani provocative and disproportionate. She didn’t mention Soleimani’s responsibility in the deaths and wounding of thousands of Americans.

“Many of her radical left friends and colleagues on Capitol Hill parroted her outrageous support of a dead Iranian terrorist and her attack on President Trump.  Clearly Pelosi and the Dimms, without hesitation, chose to defend evil and criticize President Trump’s decision to destroy evil.” – Fox News host Lou Dobbs, perfecting his skill of speaking with Trump’s balls in his mouth.