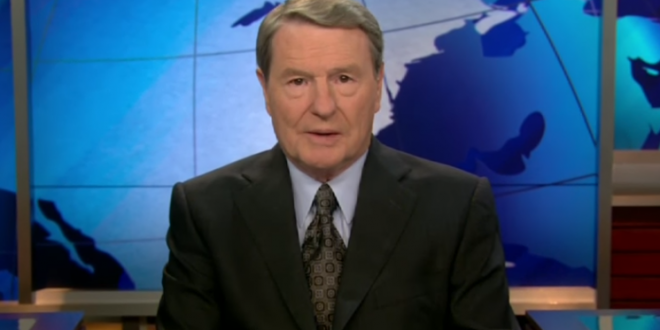 It is with great sadness that we share the news that co-founder and longtime anchor of the PBS NewsHour Jim Lehrer died today, Thursday, January 23, 2020, peacefully in his sleep at home.

Lehrer, born May 19, 1934, served as anchor of the NewsHour for 36 years before retiring in 2011. Lehrer and Robert MacNeil founded the program in 1975, out of their 1973 coverage of the Senate Watergate Hearings on PBS.

“I’m heartbroken at the loss of someone who was central to my professional life, a mentor to me and someone whose friendship I’ve cherished for decades,” said Judy Woodruff, anchor and managing editor of the PBS NewsHour.

While best known for his anchor work, which he shared for two decades with his colleague Robert MacNeil, Mr. Lehrer moderated a dozen presidential debates and was the author of more than a score of novels, which often drew on his reporting experiences. He also wrote four plays and three memoirs.

A low-key, courtly Texan who worked on Dallas newspapers in the 1960s and began his PBS career in the 1970s, Mr. Lehrer saw himself as “a print/word person at heart” and his program as a kind of newspaper for television, with high regard for balanced and objective reporting.

He was an oasis of civility in a news media that thrived on excited headlines, gotcha questions and noisy confrontations.

Previous New York City To Join Ban On Cashless Businesses
Next Trump-Approved TV Host: The Antichrist Will Be Jewish