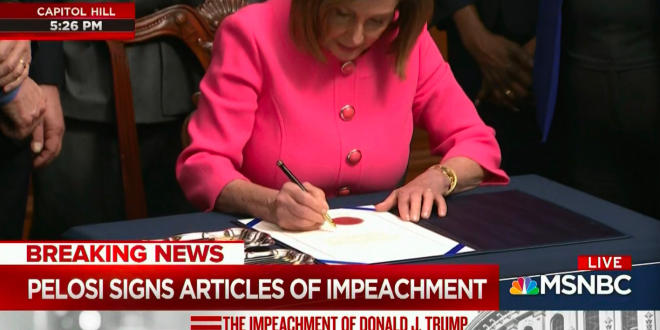 It’s a legal term — a noun — describing the final version of a document. The verb from which it comes, traditionally and in this legal sense, is to engross, meaning “to prepare the usually final handwritten or printed text of (an official document).”

More immediately, the term engrossment is being used in connection with the preparation of the final articles of impeachment against President Donald Trump that are set to be, late Wednesday afternoon, signed — in an engrossment ceremony — by Speaker of the House Nancy Pelosi, before their transmission to the Senate, where a trial is to be presided over by Chief Justice John Roberts, beginning, likely, on Tuesday.

The articles are to be walked from the lower chamber to the upper one shortly after that engrossment ceremony.