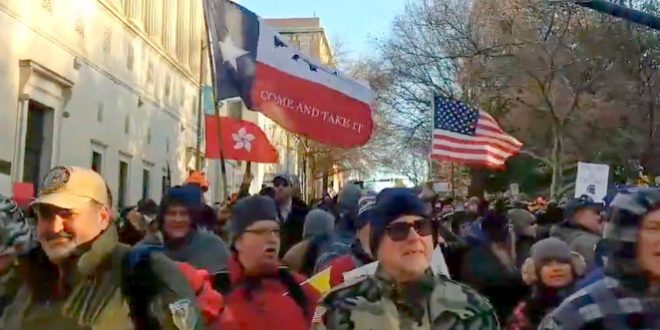 Gun-rights activists — some making deliberate displays of their military-style rifles — began to descend on Virginia’s capital city Monday to protest plans by the state’s Democratic leadership to pass gun-control legislation. Several thousand activists — mostly white and male, many clothed in camouflage and waving flags with messages of support for President Donald Trump — appeared hours before the 11 a.m. rally was set to begin.

Gov. Ralph Northam declared a temporary state of emergency days ahead of the rally, banning all weapons, including guns, from the event on Capitol Square. The expected arrival of thousands of gun-rights activists — along with members of militia groups and white supremacists — raised fears the state could again see the type of violence that exploded in Charlottesville in 2017.

So far only Russian outlets and Breitbart are streaming live.

Representation for the gay community is also in attendance at the 2nd amendment rally in Richmond, Virginia.

Good morning from Richmond, where already a few hundred protesters have gathered around the capitol grounds for a gun rally this morning #RichmondVA pic.twitter.com/XiSFW7jkjd

A ton of dudes wearing camo and carrying assault rifles. These two gentleman decided to accessorize with riot shields. pic.twitter.com/vv4VuoWi5M

Miranda Smith of Chesapeake wants you to know it’s not a 1-dimensional crowd at RIchmond gun rally. pic.twitter.com/a1B2Ga5ia3