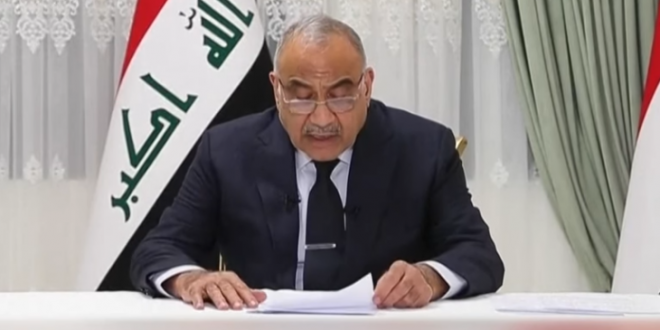 Iraqi PM To Pompeo: Advise Us On When US Will Leave

Iraqi Prime Minister Adel Abdul-Mahdi has told the U.S. secretary of state to send a delegation to Iraq tasked with formulating the mechanism for the withdrawal of U.S troops from Iraq, according to a statement released Friday.

The statement, from the office of the Iraqi caretaker prime minister, said the request came in a telephone call between Abdul-Mahdi and U.S. Secretary of State Mike Pompeo on Thursday night. It says Pompeo called the Iraqi premier.

Abdul-Mahdi’s comments to Pompeo suggests he was standing by his previous statements that U.S troops should leave Iraq despite recent signals toward de-escalation between Tehran and Washington following the tit-for-tat attacks that brought Iraq to the brink of a proxy war.

In a phone call last night with U.S. Secretary of State Mike Pompeo, Iraqi Prime Minister Adel Abdul Mahdi told the U.S. to send a delegation to Iraq to set up a mechanism for troop withdrawal from the country.

That and more in our curated news summary… https://t.co/SfmF6yrGRH