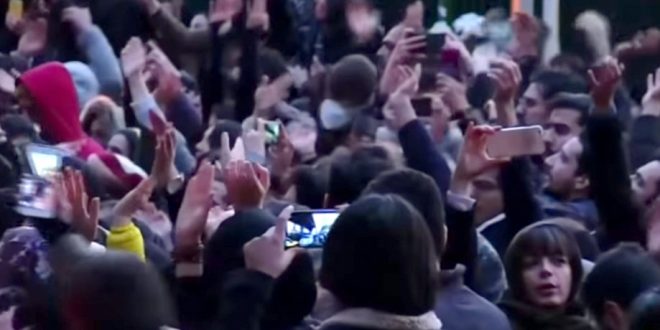 Anti-government protests erupted again Sunday night in Iran for a second day of demonstrations against the military, which first denied and then admitted it mistakenly shot down a civilian Ukrainian plane, killing all 176 on board.

“They are lying that our enemy is America, our enemy is right here,” one group of protesters chanted outside a university in Tehran. Videos showed protesters at other locations in the capital and in other Iranian cities.

Black-clad police, wearing protective riot helmets, massed in iconic Azadi Square south of the city center and at other landmarks. The police were equipped with water cannons and batons and brandished paintball guns, potentially to mark protesters to authorities. But there were no immediate reports of any crackdown on the protests.

From Iran’s National Council of Resistance:

The Iranian people’s protests against the religious tyranny ruling Iran has continued for a second consecutive day. In addition to many parts of Tehran, protests have spread to other cities in the country, including Mashhad, Isfahan, Tabriz, Kermanshah, Ahvaz, Sanandaj, Karaj, Shahroud, Qazvin, Zanjan, Semnan, Yazd, Gorgan, Arak, Oroumieh, and Babol.

In Tehran, protests are taking place at Azadi (Freedom) Square, Enqelab (Revolution) Square, and Jenah Street, among other locations. The regime’s masked agents have attacked the demonstrators. In order to prevent more people from joining the demonstrations, the regime has closed doors at the Metro at Azadi Square, leaving a large number of people stranded in the station.

The suppressive forces have brought in vehicles equipped with 50 caliber machine guns in order to confront the demonstrators. The regime is also trying to disperse protesters by using water cannons.

Tehran residents told Reuters police were out in force in the capital on Sunday. Public anger boiled up following days of denials by the military that it was to blame, issued even as Canada and the United States said a missile had brought the plane down.

“Apologise and resign,” Iran’s moderate Etemad daily wrote in a banner headline on Sunday, saying the “people’s demand” was for those responsible for mishandling the plane crisis to quit. The latest upsurge in anger adds to public pressure on the authorities, which is struggling to keep the crippled economy afloat under stringent U.S. sanctions.

Previous Iranian Olympic Medalist Reveals Her Defection
Next Israeli Education Minister Thanks God His Children Are Straight: They Grew Up In A Natural And Healthy Way