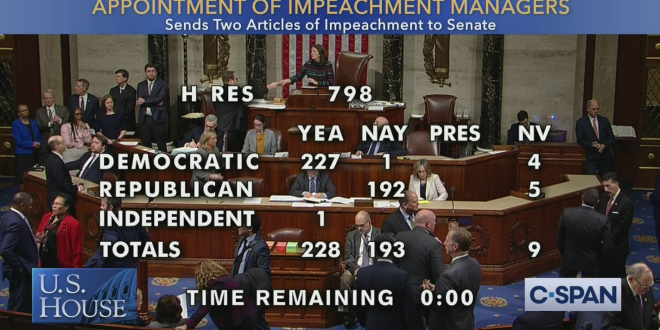 The House voted on Wednesday to send the impeachment articles against President Donald Trump to the Senate and Speaker Nancy Pelosi announced the seven House Democrats who will serve as the “managers” in the trial next week.

The measure passed on a 228 to 193 vote, with one Democrat opposing the resolution — Rep. Collin Peterson of Minnesota, who also voted last month against both articles of impeachment.

The two articles, charging abuse of power and obstruction of Congress will be hand-delivered to the Senate later Wednesday; the trial is expected to begin on Tuesday. It remains undecided if witnesses will be called to testify.

Previous Ex-CIA Official: Trump Is Obsessed With Taking Out “Celebrity” Terrorists Instead Of Those Most Dangerous
Next Buttigieg’s Cybersecurity Chief Exits In Policy Dispute