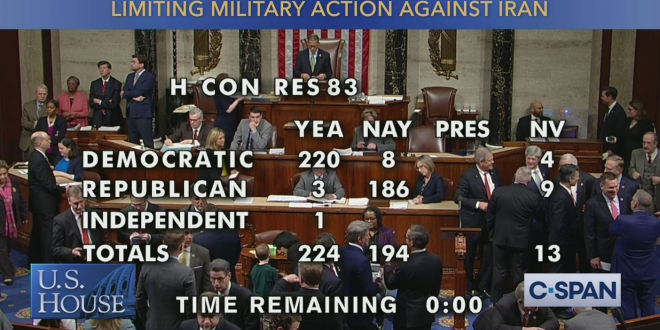 The House of Representatives on Wednesday sent President Donald Trump a decisive message on conflict with Iran, voting overwhelmingly to block his ability to engage in further military action without congressional approval.

Three Republicans and one Independent joined Democrats in order to advance a war powers resolution introduced by Rep. Elissa Slotkin (D-MI) that closely mirrors a proposal from Sen. Tim Kaine (D-VA) in the Senate.

The final vote total was 224-194, and while Democrats were broadly united, eight moderate members of the caucus ultimately defected. Though it won’t become law, the House resolution emphasizes Congress’s stance on the matter.

I represent more troops than any other member of this body. I buried one of them earlier today at Arlington.

I’m voting for this resolution. pic.twitter.com/cSCBG7CmIm

The Democratic-controlled House has approved a nonbinding resolution asserting that President Trump must seek approval from Congress before engaging in further military action against Iran. https://t.co/BHfWjU2iJd