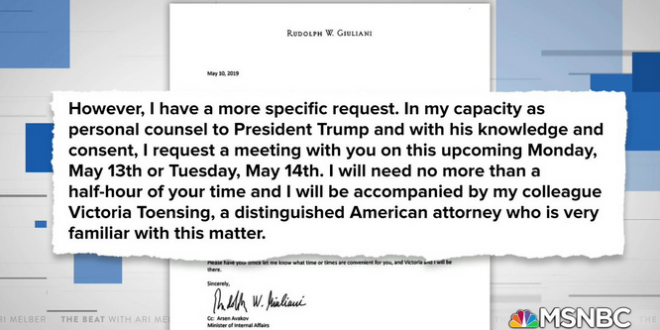 The release, which reflects the unfinished nature of the House’s impeachment inquiry, comes ahead of an expected House vote on Wednesday to formally send the impeachment articles to the Senate for a trial.

The material released on Tuesday contains several handwritten notes, emails, encrypted messages, and other documents that underscore the close relationship between Parnas and Giuliani, who was actively pursuing an effort last year to push the Ukrainian government to announce investigations targeting Trump’s political rivals.

These texts from former congressional candidate Robert Hyde to Lev Parnas, about his surveillance of Ambassador Yovanovitch, are incredibly creepy. pic.twitter.com/qerUWh82Hc

This letter from Giuliani, just released,looks hugely significant. It says Ukraine was done for the President in his personal capacity and w Trump’s knowledge,not, as Trump has claimed,for the American people. Trump is going to have to claim Giuliani lying https://t.co/p2AS6pggAa

Giuliani requested a meeting to discuss a “special request” from Trump with his “knowledge and consent.” pic.twitter.com/OM5s8gMNxR