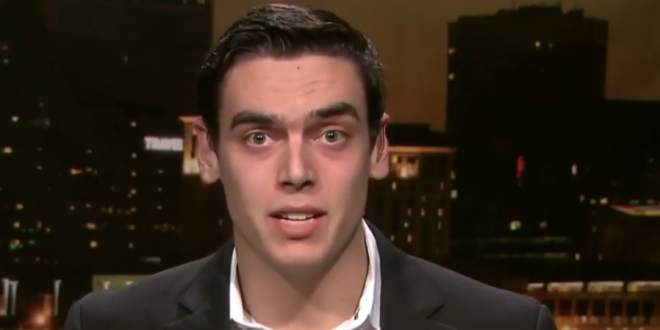 Homocon Washington Examiner columnist Brad Polumbo last appeared on JMG when he accused “unhinged, intolerant leftists” of committing a “digital lynching” of former GOP House Rep. Aaron Schock. Today Polumbo is back with a similar rant, this time aimed at the queer kink community. He writes:

Homosexuals were wrongly maligned for centuries as perverts and deviants. Modern left-wing gay people seem determined to keep up the public displays of debauchery that keep this stereotype alive. This phenomenon, wherein a loud minority of “progressive” gay people flout their deviancy in public and reinforce bad, faulty stereotypes, was on display once again this weekend.

The annual Mid-Atlantic Leather Weekend took place, selling out as thousands of gay people descended on the capital for “queer/transgender people of color kinky queer events.” Many of the events took place at gay bars, and the agenda included events such as “Deviant,” a “circuit party and celebration for queer people of color,” as well as “Sungay,” described as “an outdoor day party with leather aficionados, muscle boys, bears and more.”

This is disgusting. But it’s more than that: It’s eminently harmful to gay progress and acceptance. And it’s an affront to gay acceptance, the fight for which was actually rooted in an appeal to family values and bourgeois norms.

Read the full column. Polumbo has appeared on Fox News and on the radio show of viciously anti-LGBT former Fox host Todd Starnes.

NOTE: Probably like most of you, I’d never heard of the piece’s author until the first article linked above, but a cursory web search on him first landed me on, what else, a column that whines about nobody wanting to date homocons.

Let’s dash off to Brooks Brothers,call Bunny Bixby for her recipe of the perfect Brioche and have Miffy and Biffy over for a play date with our two darlings Eloise and Marion Francis.We can discuss what “those people” are doing to destroy our heteronormative Shanghri La FUCK YOU