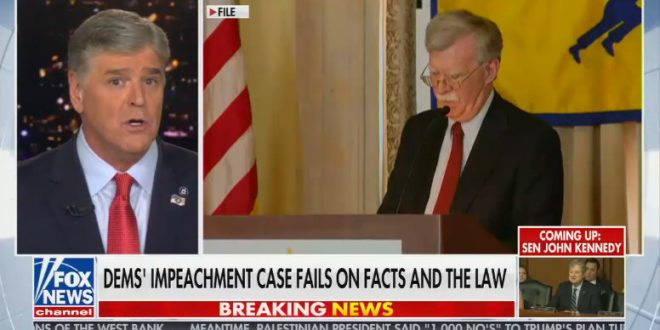 Hannity To Bolton: “Come Here” And Explain Yourself

“I have a message for John Bolton tonight. He used to be a colleague here at the Fox News channel. I remember when John was first up for the job of national security adviser. I had heard, through many sources, John was calling everyone that would listen, asking them to put in a good word for him with President Trump. He wanted this job badly.

“Now, I’m not today recognizing the guy that I thought I knew because John Bolton, I say to you tonight, you have something to say, John, come here. You worked here. This is your old home. Come on the show, and have your say on this show. We’ve invited you repeatedly, radio and TV, over the past number of weeks.” – Sean Hannity, last night.