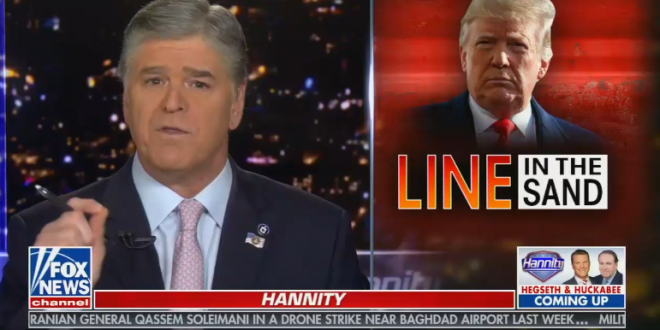 Hannity Hails Trump For Not Shooting Down Airliner

“Soleimani — we now know, we’re hearing reports, he actually flew commercial into Baghdad. Commercial airlines. Why would he do that? To use his fellow passengers at human shields. Now, he knows that we, as Americans, we value human life.

“That’s why you watch the Israelis, they’re attacked from schools and hospitals. They’re using them as shields. That is why the president didn’t shoot down the airliner. Innocent people would’ve been hurt.

“And he waited until Soleimani landed, then he took him out. And Soleimani, likely now rotting in hell.” – Fox News host Sean Hannity, on last night’s show.