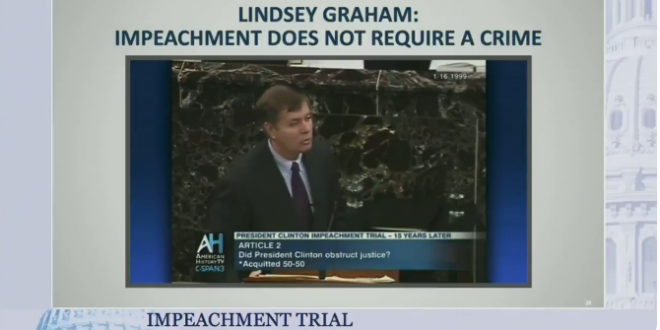 House Judiciary Chair Jerrold Nadler (D-N.Y.) is making his impeachment argument with a little blast from the past. Nadler turned to the words of one of his colleagues, Sen. Lindsey Graham (R-S.C.), who during the impeachment of former President Bill Clinton argued a crime isn’t required to impeach a president.

In an old clip, Graham says that “when you start using your office and you’re acting in a way that hurts people, you committed a high crime.” Reportedly, Graham, the chairman of the Senate Judiciary Committee, was not in his seat while Nadler played the clip of him.

Graham left the Senate floor minutes before Nadler started playing the video of him. Barrasso, who sits next to Graham, patted his empty chair as the video began to play

Nadler plays a clip of Sen. Lindsey Graham arguing during Bill Clinton’s impeachment proceedings that impeachment does not require a crime https://t.co/Av2C7OBnt7 pic.twitter.com/cYheKvyvbU