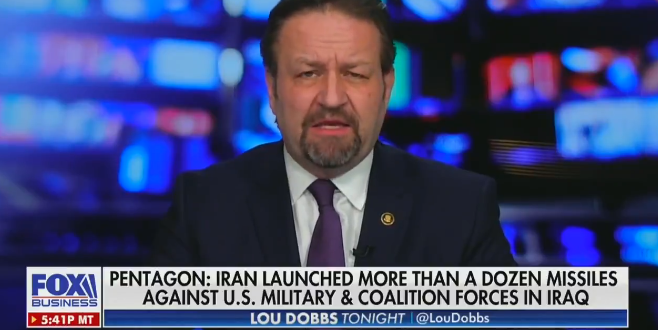 Gorka: The US Should “Welcome” Iran’s Missile Strike

Tuesday on the Fox Business Network program Lou Dobbs Tonight, guest Sebastian Gorka said people “should welcome” the Iranian missile attack on an Iraqi base that housed both U.S. and British soldiers.

Gorka, a former adviser to President Donald Trump, told Dobbs that Trump would unleash “holy hell” on Iran after they fired over a dozen missiles at Ayn al-Asad Air Base and other sites in Kurdistan. Iran’s Revolutionary Guard called the attack “revenge for the brutal assassination” of Iranian Major General Qassem Soleimani Thursday. Soleimani was the target of a drone strike authorized by Trump.

“This is a massive miscalculation by the Iranian regime,” Gorka said. “Paradoxically, we should welcome what they have decided to do because now they have done in the open what they have been doing against us and our friends for decades in the asymmetric warfare domain.”

Sebastian Gorka: “We should welcome what [the Iranians] decided to do… Now there can be no question that Iran is a threat to national security. […] But they chose the wrong time with the wrong president. This president will unleash holy hell on that regime. pic.twitter.com/leYljbn3vI