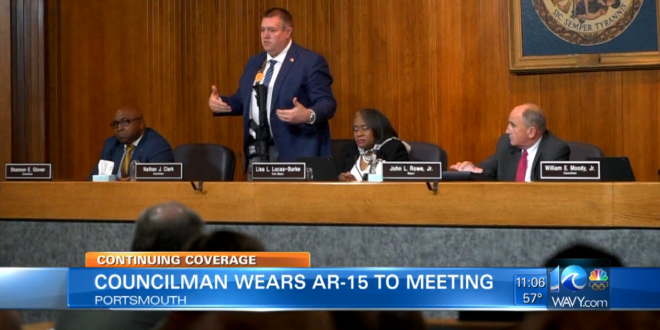 Two of Nathan Clark’s peers on the Portsmouth City Council criticized his decision to wear an AR-15 into a public meeting — without telling them ahead of time — to show his enthusiasm for the Second Amendment. One asked him to apologize. “It was a disgrace, disheartening and an embarrassment,” Vice Mayor Lucas-Burke wrote to the council Thursday morning. “Most of us were blindsided by the display.”

A day earlier, hundreds of gun rights advocates packed chambers to capacity and convinced a majority of council to make Portsmouth a so-called “Second Amendment Constitutional City.” Clark did not respond to a request for comment Thursday afternoon. His publicity stunt — Clark distributed a press release to announce the display of his semi-automatic weapon — also drew criticism outside Virginia.

“It was a disgrace, disheartening and an embarrassment…Most of us were blindsided by the display.”https://t.co/IasFP1YTm6

Councilman Nathan Clark resign. Citizens you represent should not be forced to accept him engaging in open intimidation with his AR 15. You gun lunatic, in spite of your letter, nobody knows your intent. My daughter did not know someone carrying an AR 15 would kill her. https://t.co/iDSQV78ElB