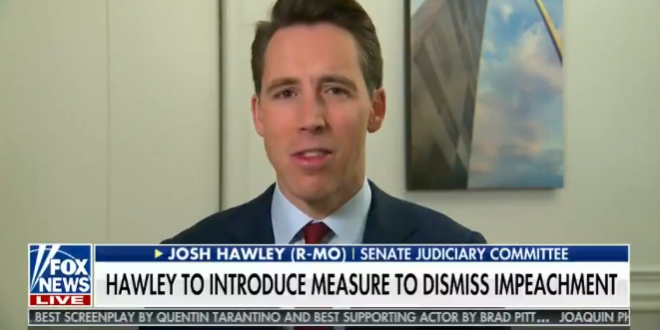 Sen. Josh Hawley (R-Mo.) pressed the case for a resolution he plans to introduce Monday that would change the Senate rules to allow it to dismiss the impeachment case against Trump if Pelosi does not send articles of impeachment to the chamber.

“Nancy Pelosi is attempting to obstruct a Senate trial. That’s all there is to it,” Hawley, a member of the Senate Judiciary Committee, said during an appearance on Fox News’s “Fox & Friends.” “It’s time for us to take action to say if you’re not going to prosecute your case, we’re throwing it out.”

It’s time to challenge Nancy Pelosi’s assault on the Constitution. Today I’m introducing a change to the Senate rules to force Pelosi & the Dems to send the Senate the impeachment articles for trial – or have them dismissed pic.twitter.com/hbSRmNuWIa

Previous Trump Demands Quick End To “Impeachment Hoax”
Next Conway Blasts Trial Delay: Is Trump A Threat Or Not?