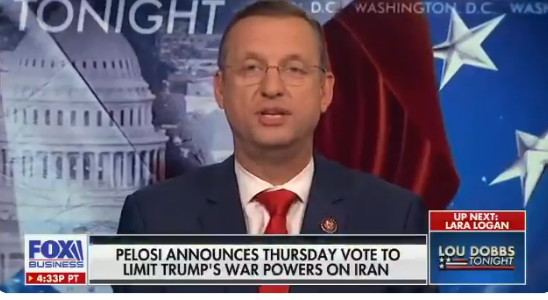 GOP Rep: “Democrats Are In Love With Terrorists”

Congressman Doug Collins (R-GA), following criticism of the airstrike which took out Qasem Soleimani from many on the Left, accused Democrats of being “in love with terrorists.”

“The Democrats are, tomorrow, talking about constraining [President Donald Trump’s] authorities as the commander-in-chief, vis-a-vis Iraq,” Lou Dobbs said. “How venal, how vapid can one party become?!”

“They’re in love with terrorists,” the congressman said of Democrats. “We see that. They mourn Soleimani more than they mourn our Gold Star families who are the ones who suffered under Soleimani.”

Doug Collins: Democrats are “in love with terrorists, we see that they mourn Soleimani more than they mourn our gold star families.” pic.twitter.com/hUIZVl2t3h

Who is running against this craven un-American ignorant asshole named Doug Collins? I will max out to you tomorrow. I hope you all join me. https://t.co/AREc1pvjdX

I am proud to be running against Doug Collins in Georgia’s 9th Congressional District. pic.twitter.com/HyLqL2jnZu

Join me in telling the lying piece of human excrement, Doug Collins, to please go f*ck himself. pic.twitter.com/jPqxzJ0IB9

I happen to be a Democrat and I prosecuted terrorists for living. Sent many to prison for life. I don’t know what Doug Collins has ever done to for America except preen and sound stupid. https://t.co/AREc1pvjdX