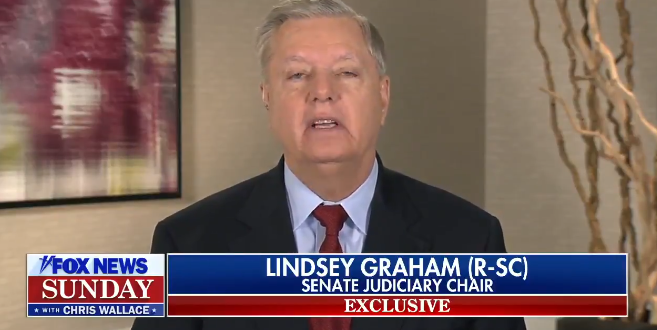 Fox News Host Confronts Graham On Trial Witnesses: You Demanded Them For Bill Clinton, Why Not Now?

Fox News host Chris Wallace called out Sen. Lindsey Graham (R-SC) for complaining that the House of Representatives had rushed the impeachment of President Donald Trump. Graham argued that the president’s executive privilege claim would prevent former National Security Adviser John Bolton and others from testifying.

“If we call one witness, we’re going to call all the witnesses,” Graham insisted. “There’s not going to be a process where the Democrats get their witnesses and the president gets shut out. “I want this trial to get over with as quick as possible. I want the people of the United States to pick the next president, not a court of impeachment.”

Wallace also brought up how Graham has rejected the idea of hearing from witnesses at the trial, saying, “That directly contradicts what you said as a Republican House impeachment manager in 1999 during the Clinton impeachment trial.”

He quoted Graham at the time saying, “There may be some conflict that has to be resolved by presenting live witnesses. That’s what happens every day in court and I think the Senate can stand that.” Wallace asked, “Why were witnesses okay then, but they’re over the line now?”

Wallace said, “Have you given up on the idea that the majority will vote to dismiss case right away?” Graham said, “That’s dead for practical purposes. There are a lot of senators who I think will wind up acquitting the president but believe we need to hear the House’s case and the president’s case in answer to the House’s case.” He added, “The idea of dismissing the case early on is not going to happen, We don’t have the votes for that.”