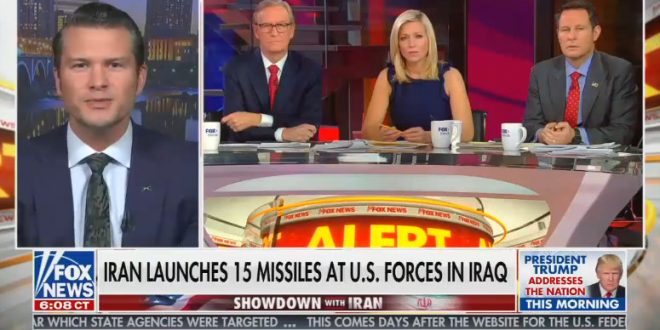 Fox Host Calls For Massive US Strikes On Iran [VIDEO]

“I happen to believe that we can’t kick the can down the road any longer in trying to prevent Iran from getting a nuclear bomb. They used the killing of Soleimani as an excuse to say, ‘we’re scrapping the Iran deal.’ We all know they were scrapping it anyway, so what better time than now to say, we’re starting the clock, you’ve got a week, you’ve got X amount of time before we start taking out your energy production facilities. We take out key infrastructure. We take out your missile sites. We take out nuclear developments.

“We take out port capabilities. Or, you know what, take out a Quds headquarters while you’re at it, if you want. I understand that’s not a popular idea. I don’t want boots on the ground, I don’t want occupation, I don’t want endless war. But Iran has been in endless war with us for 40 years. Either we put up and shut up now and stop it, or we kind of wait, go back to the table, and let them dither while they attempt to continue to develop the capabilities to do precisely what they said they want to do.” – Fox host Pete Hegseth.

Yesterday Hegseth said he doesn’t care if Trump commits war crimes. It was Hegseth who privately urged Trump to pardon war criminals while simultaneously promoting their causes to his Fox & Friends audience. Hegseth served as a prison guard at Guantanamo Bay while in the military.