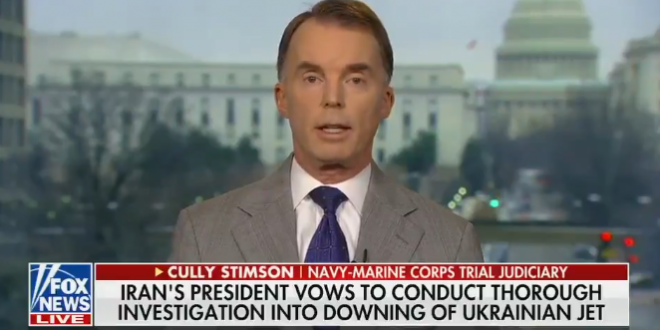 “He made himself a lawful target. It doesn’t bother me at all [that Trump lied about an imminent attack on four US embassies] because as a legal matter it wasn’t required for the United States to prove imminence.

“I think they [Democrats] have lost the narrative talking about imminence as if it was required when it wasn’t.” – Heritage Foundation senior fellow Cully Stimson, speaking this afternoon on Fox News.

Stimson, you may recall, resigned as George W. Bush’s Deputy Assistant Secretary of Defense for Detainee Affairs after commenting on the legal defense of detainees at Guantanamo Bay, saying, “Corporate CEOs seeing this should ask firms to choose between lucrative retainers and representing terrorists.” The Pentagon disavowed his statement and Stimson apologized in a followup that was widely criticized as insincere.

Stimson has been nominated by Trump in two successive years to be General Counsel for the US Navy and both times the nominations were returned after the full Senate declined to consider him.

Fox Guest: “It doesn’t bother me at all” whether or not the administration lied about the 4 embassies because “as a legal matter it wasn’t required for the United States to prove imminence.” pic.twitter.com/JckhlJS0kR