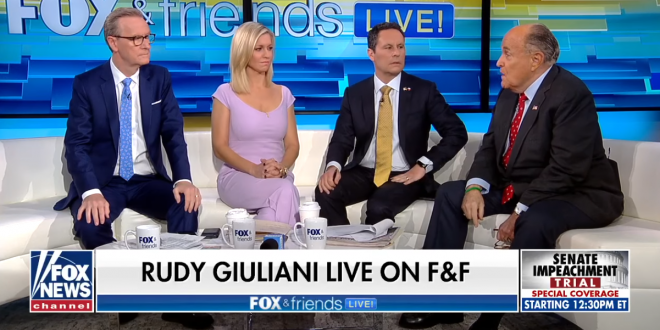 After Giuliani once again repeated his Biden-related conspiracies, co-host Steve Doocy stepped in to wrap up the segment. “I know you could go clear through noon when your podcast starts. Give it up for Rudy Giuliani,” Doocy exclaimed to cheers from the audience. “We’re going to be watching.”

The Trump lawyer, however, wasn’t budging, instead saying that he’d only shown the “tip of the iceberg” while rambling on some more.  “Would you like me to give up?” Giuliani replied, before adding: “Would you like me to say OK, Biden can keep his 8 million that he got in bribes. He can keep all the bribes that they got.”

The ex-mayor would continue to steamroll over Doocy’s efforts to go to commercial break so he could get yet another last word in, finally giving it up after Doocy’s fifth attempt to end the interview.