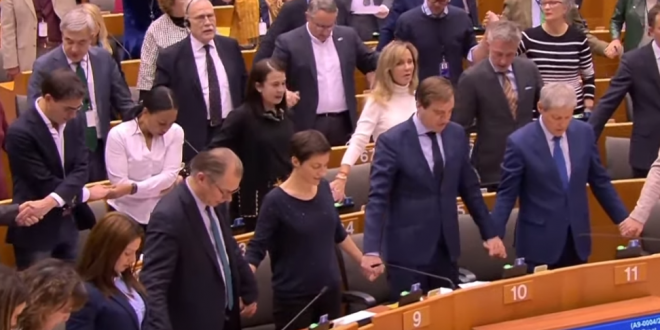 Britain’s departure from the EU on 31 January was set in stone in a historic moment for the nation as MEPs in Brussels ratified the withdrawal agreement before breaking out in a rendition of Auld Lang Syne.

As the president of the European parliament, David Sassoli, announced the result of the vote, with 621 in favour to 38 against with 13 abstentions, MEPs stood almost as one to sing the Scottish song.

The vote ensures that the UK’s 47 years of membership of the EU will now end at midnight central European time on Friday, after years of troubled talks and uncertainty.

After all we’ve done, comparing them to Nazis for three years and sending them Nigel fucking Farage, and they still give us the touching tribute of singing Auld Lang Syne as badly as we sing it. pic.twitter.com/31Jc12HpNx

Previous Warren: Criminalize Spreading Voting Disinformation
Next Pastor Who “Laid Hands” On Trump: Jesus Would “Beat The Crap” Out Of John Bolton, Wish I’d Done It Myself