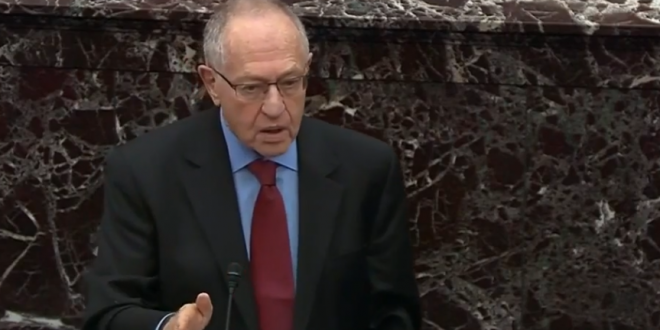 Dershowitz: You’re Distorting My “So What?” Defense

President Donald Trump’s defense lawyer Alan Dershowitz now says his headline-dominating argument against impeaching the president was ‘distorted.’ In a day-after tweet, the former Harvard Law professor complained Thursday about the portrayal of his testimony at Trump’s Senate Trial that a president, if he believes his re-election is in the “national interest,” is essentially immune from impeachment for actions in support of that idea.

That argument left even some of Trump’s top allies backing away from the criminal attorney’s claim, though Dershowitz was testifying on Trump’s behalf at the Senate trial. “They characterized my argument as if I had said that if a president believes that his re-election was in the national interest, he can do anything,” the retired professor said Thursday. “I said nothing like that, as anyone who actually heard what I said can attest.”

I gave as an example mixed motive President Lindon’s decision to send troops home from the battlefield to Indiana so that they would vote for his party. He genuinely believed that his party’s victory in Indiana was essential to the war effort, but it also helped him politically.