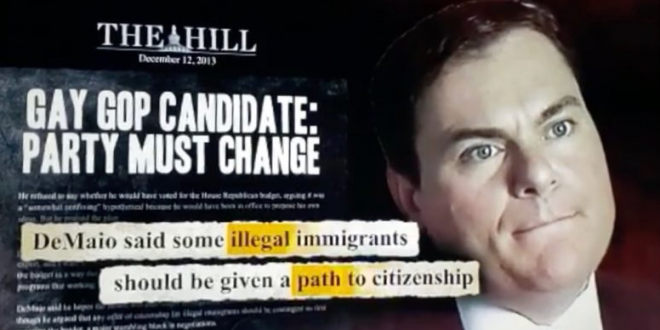 A new campaign ad from former Rep. Darrell Issa has drawn criticism from some of his Republican colleagues for highlighting the sexuality of his opponent Carl DeMaio. The TV ad, which began airing earlier this week, runs 30 seconds and begins by decrying a recent attack ad from DeMaio.

The ad also highlighted negative comments DeMaio has made about President Donald Trump in news articles that featured headlines emphasizing that DeMaio is gay.

“You’re talking about some headlines from actual newspapers,” Issa said. “I certainly think you should talk to The Hill and the Blade and ask them why they use those words.” He added that the headlines are from stories that document DeMaio’s “real failures” and indicated his campaign will continue to reference the articles.

Darrell Issa is standing by a new ad about Carl DeMaio that the chair of the San Diego Republican party called “highly inappropriate.” The ad uses imagery of MS-13 and uses headlines with the word “Gay” to describe DeMaio. Here’s the exchange we had at a press conference today. pic.twitter.com/OqgUUNhYhH

This story from @KUSINEWS nails the CLEAR contrast in our race for the 50th Congressional District: I’m a FIGHTER who will have President Trump’s back in Congress while Darrell Issa BETRAYED President Trump time and again. Check it out: