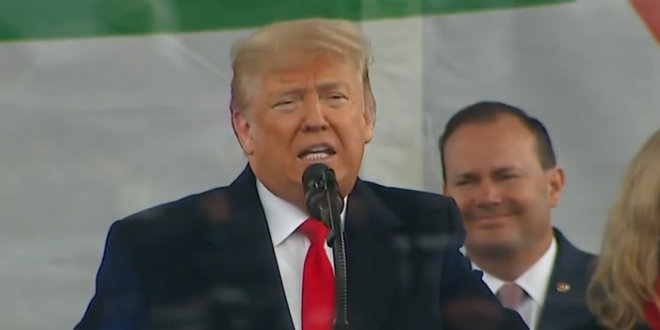 His presence ensured it was hard to tell where the march ended and where a Trump rally began. Street vendors sold “Babies Lives Matter” T-shirts side by side with “Make America Great Again” and “Trump 2020: Keep America Great” caps.

Trump badges and March for Life badges were cheek by jowl. One vendor pushed a cart with T-shirts that depicted the president urinating on a CNN logo.

In a crowd thousands strong, numerous people, including university and school students who had been bussed in, wore Trump regalia or carried red signs that said: “Most pro-life president ever.” One waved a giant blue flag that proclaimed: “Trump 2020. No more bullshit.”

Trump claimed: “Nearly every top Democrat in Congress now supports taxpayer-funded abortion, all the way up until the moment of birth.” It was a spurious assertion but the crowd booed.

Trump claimed: “Last year, lawmakers in New York cheered with delight upon the passage of legislation that would allow a baby to be ripped from the mother’s womb right up until delivery.” It was a spurious assertion but the crowd booed.

Trump claimed: “And we love the Commonwealth of Virginia, but what is going on in Virginia? What is going on? The governor stated that he would execute a baby after birth.” It was a spurious assertion but the crowd booed.

Previous Scott Lively: Enlist In My “Revolutionary Regiment” And Help Rescue America From The Tyranny Of The Godless
Next Sec. Mike Pompeo Screamed F-Bombs At NPR Reporter: “Do You Think Americans Really Care About Ukraine?”