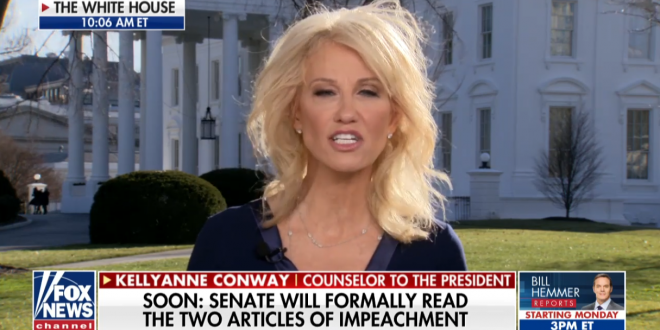 Conway Refuses Four Times To Say If Parnas Is Lying

During a brutal interview on Thursday morning’s edition of Fox News’ America’s Newsroom, anchors Bill Hemmer and Sandra Smith took four shots at the question, and while Conway’s lengthy responses included everything from mock courtroom skits to Mecklenburg shout-outs, she would not offer the “yes” or “no” that were requested.

“Well remember, people who go on TV are never under oath,” Conway said, then attacked Parnas’ credibility by citing his arrest and indictment, and by offering canned statements by administration spokespeople as contradictory evidence.

If you can bear it, watch the full clip. Kellyanne Conway remains the undisputed queen of word salad diversions.