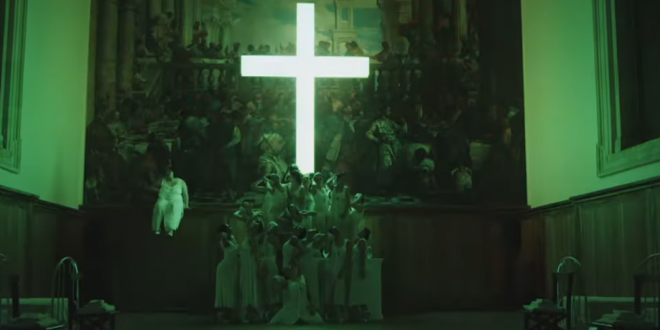 A scene in The New Pope, an HBO mini-series starring Jude Law and John Malkovich, in which sexy young nuns dance in their nighties beneath a giant fluorescent crucifix, has incurred the wrath of the Catholic Church.

The provocative scene, which was filmed in a former monastery in Venice, was denounced as “offensive” by the archbishop of the city, whose official title is patriarch.

Accompanied by flashing strobe lights and club music, around 15 young women gyrate and dance at the base of the crucifix in the opening titles of the new series, which follows the success of The Young Pope. The scene was not only offensive and profane but also gratuitously provocative, Father Caputo said.

The song is by German duo Sofi Tukker, whose name is a mashup of their first names and not a reference to the bawdy comedian made immortal by Bette Midler.

I watched last night and it didn’t occur to me that the women were supposed to be nuns. I also didn’t recognize John Malkovitch at all.