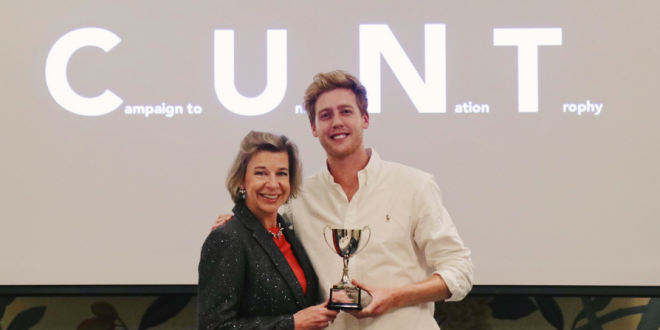 Katie Hopkins, a far right British conservative who was just banned from Twitter for violating its hate speech rules, was duped into accepting a fake “Campaign to Unify the Nation Trophy” as part of an elaborate prank. The ruse, concocted by two British YouTube pranksters, Josh Pieters and Archie Manners, was so successful that it even convinced Hopkins to fly from London to Prague to be recognized with a “CUNT” award.

To pull off the ruse, the pair set up a fake free speech organization online months before their invite to Hopkins. As a flourish, they used a picture of a founder of the Ku Klux Klan, sans robe, to represent their nonexistent group’s president. At the “award” ceremony in the Czech Republic, the pair used hired actors to play other members of the non-existent free speech group while they wined and dined a completely clueless Hopkins at the Four Seasons hotel.

Hopkins was a contestant on the British version of The Apprentice and several other reality shows. She’s since become one of the UK’s most prominent far-right activists and is a supporter of far-right extremist Tommy Robinson, a founder of the extremist English Defense League. She was fired from her columnist gig at the Daily Mail after tweeting a call for a “final solution” after the bombing at Ariana Grande’s Manchester concert. Trump has retweeted her multiple times.

Now that Katie Hopkins can’t read Twitter, I can tell you that on Monday I made her fly to Prague to pick up a completely fake award. Video up shortly. pic.twitter.com/8EeQsQX6U3