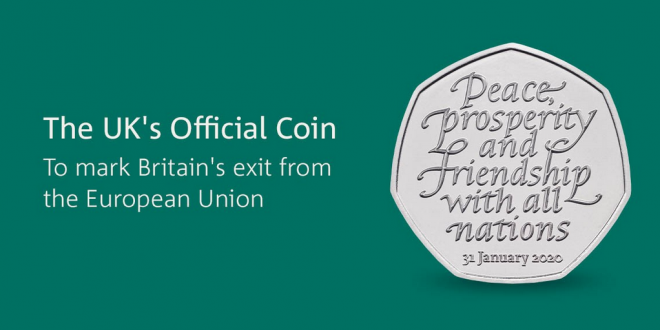 A commemorative 50p coin marking the UK’s departure from the EU has been unveiled by Chancellor Sajid Javid. The coins bear the inscription “Peace, prosperity and friendship with all nations” and the date of 31 January.

Mr Javid had first ordered production of the coins in advance of the UK’s original 31 October departure date. But the Brexit delay meant about a million coins had to be melted down and the metal put aside until a new exit date was confirmed.

About three million Brexit coins will enter circulation around the UK from Friday, with a further seven million to be added later in the year. Mr Javid, who is Master of the Mint, was given the first batch of coins and will present one to Prime Minister Boris Johnson this week.

On 31 January 2020, a new 50p coin marking the United Kingdom’s withdrawal from the European Union will be released. More >> https://t.co/N5VlnEy2ho pic.twitter.com/pkDtqfzLGd

📣Let us know if you find a Brexit coin this week!
Around 3 million will enter banks, Post Offices & shops from Friday 31.
They bear the words ‘Peace, prosperity and friendship with all nations’.https://t.co/pvRnXik659 pic.twitter.com/SshJ2H2CAm