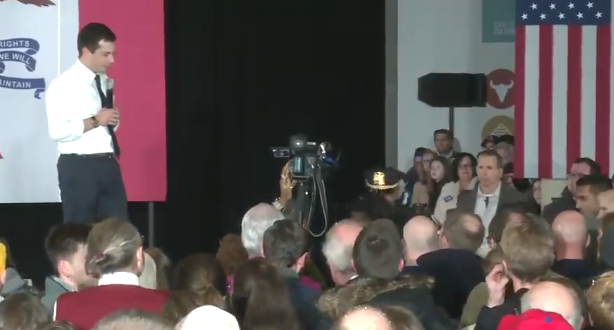 Protesters disrupted a Pete Buttigieg campaign event on Sunday night as they demonstrated against the former South Bend mayor’s record on housing. The activists chanted “black lives matter” and “anti-poor, anti-black” after the Democratic primary candidate took the stage in Des Moines, Iowa to deliver a speech to supporters.

Buttigieg told the protesters he wanted to talk with them about their issues “respectfully” before both the activists and his supporters began chanting, which led to the demonstrators being escorted from the venue.

“I’m just troubled because you’re citing information that is factually incorrect,” the former South Bend. Mayor said. “I’m sorry but this is not the best way for us to have this conversation.”

WATCH: Pete Buttigieg was interrupted by Black Lives Matter protesters here in Iowa challenging his record as South Bend Mayor—he told them, “I think your facts are a little wrong, so I’d love a chance to talk with you about it, but I’d like for us to talk about it respectfully.” pic.twitter.com/dYO106Jyzz

Some protest here at the @PeteButtigieg event in Des Moines pic.twitter.com/R85cQmHRul