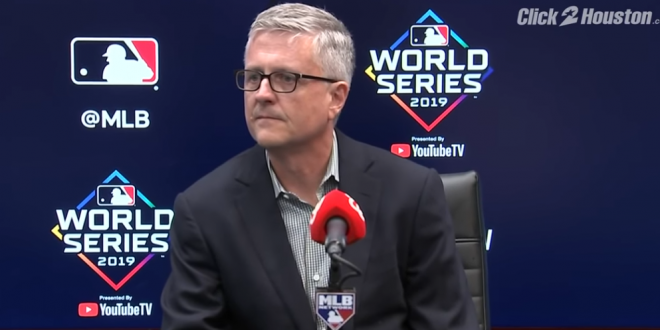 Major League Baseball issued harsh penalties against the Houston Astros on Monday after a lengthy investigation into the team’s use of technology to steal signs. The sanctions include one-year suspensions for Astros manager AJ Hinch and general manager Jeff Luhnow [photo] as well as a $5 million fine and the loss of future draft picks.

In a bombshell report published by The Athletic in November, right-hander Mike Fiers, who pitched for the Astros in 2017, gave an on-the-record account of how team used a center-field camera to pick up the opposing team’s catcher’s signs and then relayed the signs to Astros batters.

The relay method used to alert hitters of an incoming off-speed pitch supposedly involved banging a trashcan in the dugout. It’s expected that the Boston Red Sox will also face severe punishment for their alleged use of cameras to steal signs during their 2018 championship season.

Astros GM Jeff Luhnow and manager AJ Hinch suspended for a year after MLB’s investigation into cheating during 2017 championship season, per @Ken_Rosenthal and @EvanDrellich.

BREAKING: The Cheating Scumbag Houston Astros Just Got Hit With One Of The Biggest Punishments In Baseball Historyhttps://t.co/CAqpUUp7SQ pic.twitter.com/iNGUDT8OlN