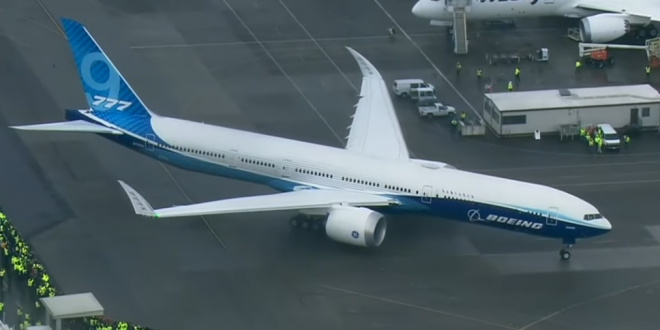 Boeing began the maiden flight on Saturday of the world’s largest twin-engined jetliner as the embattled planemaker steps up competition with European rival Airbus in a respite from a crisis over its smaller 737 MAX.

The 777X, a larger and more efficient version of Boeing’s successful 777 mini-jumbo, took off outside Seattle at 10:09 a.m. local time after high winds forced the company to postpone two earlier attempts this week.

Boeing officials said the maiden voyage would last 3-5 hours and herald months of testing and certification before the aircraft enters service with Emirates in 2021, a year later than originally scheduled because of snags during development.

Previous Graham: Hooray, The Church Of England Is Anti-Gay
Next US House Managers Deliver 28,578-Page Trial Record: “The Mountain Of Evidence Of Impeachable Offenses”